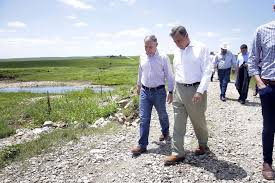 Scott Pruitt, the former Oklahoma Attorney General who now commands the U.S. Environmental Protection Agency made a visit to the state on Friday, reviewing environmental work in Osage County.

He came to inspect pollution discovered nearly a year ago at Bird Creek on the Chapman Ranch.

“It’s our agency doing what it’s supposed to do, coming in, finding out what the source of the problem is, getting it corrected,” said Pruitt, according to a report in the Tulsa World.

Pruitt was accompanied by his national team including Senior Adviser Albert Kelly as well as Sam Coleman, the EPA Region 6 administrator from Dallas.

As OK Energy Today recently reported, the source of the saltwater pollution has yet to be determined. But Pruitt thinks his giant agency finally has a plan that will work.

“For many months, nine months or so, there was tremendous concern by landowners, property owners here and not much direction on what was going to happen next,” he explained. “Now I think we’ve got a good plan going forward. I think the landowners in the area feel confident that there is a requisite response to the issues of concern for their cattle and the environment here.”

The pollution is located only a few miles west of the Tallgrass Prairie Preserve. Tests have indicated the brine found in the creek is extremely toxic.

Pruitt and others with the EPA met privately with the landowners for about 45 minutes. The EPA and the Bureau of Indian Affairs have the regulatory and environmental responsibility for oil production in Osage county because the mineral rights belong to the Osage Nation.