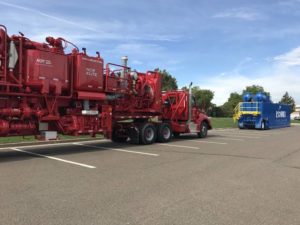 Name recognition comes easy for one of the world’s largest oil field services companies like Halliburton. It becomes more visible and apparent to state leaders when there are two large service trucks parked on the Oklahoma Capitol surface lot as the legislative session winds down.

In a story published on Monday in The Oklahoman, reporter Dale Denwalt noted on Monday that Halliburton and Rockwater Energy Solutions left the “visual reminders” in the parking lot over the weekend.

“Now, just when companies are recovering and rehiring in Oklahoma, the Legislature could be making policy decisions that impact the industry’s ability to achieve a full recovery in Oklahoma,” said Donelle Harder, Vice President of Communications for the Oklahoma Oil and Gas Association. “It’s difficult for the oil and gas industry to show a force in human numbers day after day for extended periods of time because these individuals are working and many are out in the field, outside of Oklahoma City. The trucks are part of communicating this week that this is not a faceless industry.”

With sine die adjournment approaching on Friday, it appears the gross production tax is the major hurdle for this year’s legislative session. Both sides have brought out the big guns in an all-out assault to balance the budget without negotiating a compromise agreement.

The Oklahoman also reported that an Office of Management and Enterprise Services spokesman indicated the agency approved the display after ensuring it wasn’t a safety hazard. The trucks were scheduled to be voluntarily removed from the State Capitol parking lot by late Monday afternoon.

(Photo credited to Dale Denwalt and The Oklahoman)