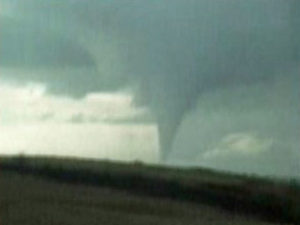 When a tornado plowed into south Elk City this week, it hit squarely in a business district filled with a handful of energy companies.

The storm destroyed operations at National Oilwell Varco and Fairway Resources and badly damaged the offices of LuGreg Trucking and C and J Energy.

“It blew down three shop doors, put a 30 foot by 50 foot hole in the building, bent walls over, rolled two trailers and left a hole in my office 6 feet by one foot,” he said in describing the damage. “It blew down several hundred feet of chain-link fence, blew out all the windows in one truck and left a one by three hole in another.”

“Yeh, got us pretty good. But we haven’t slowed down,” he added. A portable office is being moved to the site.

Minick, his wife and three employees were at the office as the storm hit. They scrambled for the safe room.

“Hit us as we were closing the door and we could see the ceiling waving up and down two to three feet. The pressure was phenomenal! About to make us grown men cry,” he recalled. But they survived uninjured.

“We didn’t get leveled like the buildings south of us.”

Phone calls to National Oilwell Varco at the headquarters in Houston, Texas were not returned. No one could be reached at Fairway Resources nor its headquarters in Southlake, Texas. It was the same for attempts to reach C and J Energy.