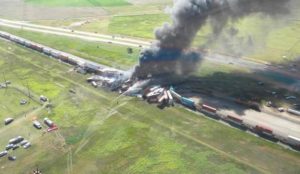 Details of the deadly June 28, 2016 collision of two freight trains that killed three people near the town of Panhandle, Texas are coming out as the incident remains under investigation by the National Transportation Safety Board.

Only one man survived the crash of the two Burlington Northern Santa Fe trains. One of the trains had just refueled in Amarillo and the resulting fire burned for nearly 40 hours before firefighters could get it under control. It wasn’t until July 1st when the site was cleared and repaired so other trains could move on the tracks.

Because the eastbound train had just refueled in Amarillo, and many of the container cars were loaded with paper products, the huge fire that ignited after the collision “raged” for up to 40 hours before it was under control, Faust said.

The bodies of engineer Cody Owens, 52 and conductor Kenneth Smith, 59 were found quickly. But it took days before the body of conductor Lara Gayle Taylor, 45 of Amarillo was found.

The survivor was a crew member who jumped from the train immediately prior to the head-on crash.

“I tried like crazy to get her to jump off, and I assumed she was going to leave behind me,” said Clay Sims in interviews with other BNSF officials who talked with him after the crash according to the Amarillo Globe-News

Sims later filed suit in Tarrant County court for $1 million against the railroad. The BNSF is headquartered in Fort Worth, Texas.

The paper reported that numerous transcribed interviews were among dozens of documents released about the crash. But the NTSB has yet to release a final report.