Rig Counts Grew in Oklahoma and the U.S. in Past Week 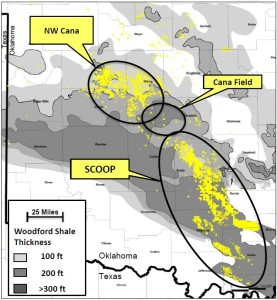 The largest Continental well is the Trammell at 11 6N 6W located about 9 miles east of Chickasha and just north of the Washita River. Its production is 1,808 barrels of oil a day along with 2,952 Mcf of natural gas. Its spud date was Oct 9, 2016 with drilling finished in January 2017 and completion made Feb. 10. It’s in the Springer formation with a total depth of 21,374 and true vertical depth of 13,143 feet.

The second Continental well is the Strassle located at 21 7N 5W southwest of Blanchard and had initial production of 1,117 barrels equivalent of oil a day along with 807 Mcf of gas. The well was actually completed in December of last year with a spud date of Sept. 1 and the end of drilling in mid-October. It’s in the Springer formation and had a total depth of 17,873 feet with true vertical depth of 11,387 feet.

Both wells are revealed in the latest completion reports in OK Energy Today.

While the STACK is yielding more wells, some are happening in Dewey County rather than the popular trio of Canadian, Kingfisher and Blaine Counties.

Mewbourne Oil Company and Newfield Exploration each reported wells in Dewey County over the past several days. the Mewbourne well is located southeast of the town of Camargo at 16 17N 19W while the Newfield well is east of Seilling at 6 19N 15W.