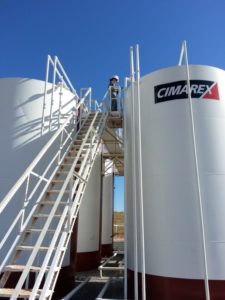 Oklahoma’s STACK has been kind to Cimarex Energy Company. The Denver, Colorado exploration company reported six wells completed and producing in Blaine and Canadian Counties, two of the counties that make up the brunt of the STACK oil play.

The three wells in Blaine county were the largest with the Holieway producing 851 barrels of oil a day along with 2,881 Mcf of gas. The well is located about 5 miles southwest of the city of Watonga at 4 15N 12W and had a spud date in November 2016. Drilling was finished in January with completion made March 18, 2017, according to the reports published this week by OK Energy Today.

The Mitchell well located at 26 16N 12W or about 2 miles southwest of Watonga produced 931 barrels of oil daily along with 4,119 Mcf of gas. The spud date was October 2016 and drilling ended in December with completion made February of this year.

The Sewell well, 13 16N 12W or about one mile west of Watonga along Airport Road had a production of 512 barrels of oil daily in addition to 886 Mcf of gas.

Cimarex Energy also brought in three wells in Canadian county. The largest was the Gatz well, 30 11N 7W, with production of 505 barrels of oil along with 2,293 Mcf of gas. The location is about 2 miles west of Union City. Cimarex had a smaller well in the same area as well as one well northwest of Calumet.

The company’s position in the STACK could be explored when it holds its first quarter 2017 financial results announcement on May 8.