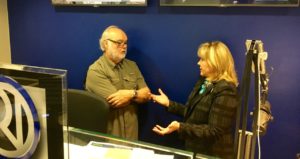 Governor Mary Fallin is clearly growing anxious with only five working days remaining before the legislative deadline and there is still no agreement on a budget deal.

It was obvious as she spoke with OK Energy Today on Friday while the State Senate held a rare Friday session. The State House, the legislative body responsible for creation of financial bills, was not in session.

From a budget standpoint as well as one from the energy industry’s view, will the gross production tax on oil and gas be part of a budget deal?

“It’s on the table,” answered the governor. But is there a magical number when it comes to a possible hike in the tax? The governor didn’t offer one, saying there are too many variables involved in reaching a budget deal, including a bill to increase lateral drilling by oil and gas companies.

Would she reject or veto a bill raising the tax back to 7% for all wells?

“That’s too simplistic,” said the governor, again explaining many things are on the table and it’s simply too soon to say ‘yea’ or ‘nay’ on what figure might be appropriate in raising the gross production tax.

Listen to the interview by Jerry Bohnen and Justin Dougherty.