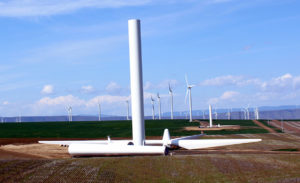 The wind turbines are going up in New Mexico’s largest wind farm.

The final phase of construction at the $500 million El Cabo Wind Farm in Torrance County is getting underway and more construction workers are arriving this week.

State Land Commissioner Aubrey Dunn says a jobs report indicated 300 temporary construction jobs were already filled for the project and another 100 workers will be hired in the coming weeks.

The El Cabo wind farm is a project of Avangrid Renewables which eventually will hire 17 permanent full-time employees. The wind farm should be operational by the end of 2017 and will include more than 140 turbines in an area located west of Encino.

The little community is located southwest of Santa Rosa. And if you’ve ever driven I-40 in New Mexico, you might know where Cline’s Corner is located. Encino is south of there.

Torrance County already has the High Lonesome Wind farm near the community of Willard. A third wind farm is proposed for the county and county officials plan an April 12 hearing on a commercial solar project as well.