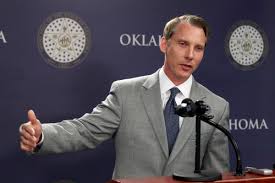 After two months of a slight surge in gross receipts to the State treasury, they fell below collections made in March of 2016, according to State Treasurer Ken Miller.

The oil and gas gross production tax collections in the past 12 months brought in $391.5 million, a drop of $11.8 million or 2.9 percent from the prior period.

“March gross receipts notwithstanding, leading indicators continue to show Oklahoma’s economy is slowly on the mend,” Miller said. “The average decline in gross receipts has slowed and the unemployment rate is shrinking as rig counts rise along with business conditions and consumer confidence.”

The total March collections were $915 million, a drop of $25.5 million or 2.7 percent compared to the March 2016 collections. Collections from corporate income and sales taxes were also down from a year ago.

Individual income tax collections for March were $306.5 million or a 6 percent increase from a year earlier. Corporate collections totaled $28.1 million, a drop of $50.4 million or 64.2 percent.