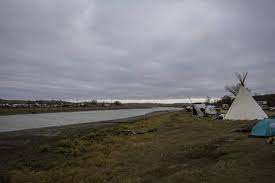 While workers deal with the cleanup of the trash left by the environmental protesters at the Dakota Access Pipeline in North Dakota, the protesters left something else behind.  A body.

The Morton county sheriff announced the body of a California activist was pulled from the Cannonball River where it had been left with all the debris and garbage. It was identified as Damjan Nedelkovski, 35, of Glendale, California.

Investigators say they’re awaiting autopsy results to show the cause of death, but there appeared to be no trauma to the body. Family and friends had a last contact with him in October 2016 and they reported him missing in November 2016.

But Nedelkovski was known to be at the protest sites. The announcement by the sheriff’s office led one website, GatewayPundit.com to make some cynical observations.

“A dead body, not surprisingly nestled among all the garbage-barge-like flotsam and jetsam such Occupy-inspired campout protests always leave in their wake.”

The site accused the environmentalists and activists of being self-righteous yet uncaring.

“That’s right, they left a fellow protester’s dead body behind in a river but piously lectured the people of the North Dakota about the horrors of the Dakota Access Pipeline polluting some lake.”