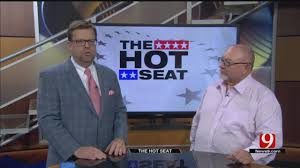 The Oklahoma Energy Producers Alliance is making its voice known as it pressures the legislature and state leaders to do more to protect vertical well operators from losing oil to horizontal wells.

Mike Cantrell with the group was interviewed over the weekend on Scott Mitchell’s “Hot Seat” on News 9 TV.  He made it clear the group just wants protection from losing oil to the horizontal well developers.

“Almost every one of those horizontal frac jobs that’s in reservoirs that we’re producing with vertical wells is damaging or destroying those vertical wells,” said Cantrell.

He even cited the case of one company in Kingfisher county that suffered the loss of more than a dozen wells due to horizontal drilling into the same reservoir.

“One company in Kingfisher lost 17 of their wells and they think they’re gonna lose four more this week because of horizontal fracking,” said Cantrell. “See, I don’t think that oughta happen.”

He said there should be protection for the vertical well operators.

“When you take somebody’s property, you oughta make a deal with ’em, either buy from ’em before you take it or whether you make an arrangement, like they do in every other state.”

The dispute has led to a call by the Oklahoma Independent Petroleum Association for former Tulsa Mayor Dewey Bartlett Jr. to resign from his post at the OIPA.  Bartlett, a member of the new Producers Alliance and one of its key spokesmen says he won’t do it.

OIPA chairman Jeffrey McDougall wrote Bartlett saying Bartlett’s stance is in direct opposition to one taken by the association.