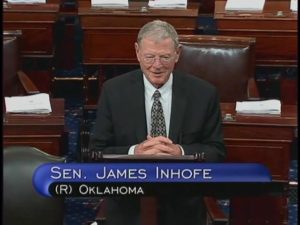 It’s a given that newly-confirmed U.S. Court Justice Neil Gorsuch will eventually handle some energy-related cases in the coming years. It’s why his confirmation is important to follow.

Oklahoma U.S. Senators Jim Inhofe and James Lankford openly campaigned for the confirmation, using Senate floor speeches on Thursday to support Judge Gorsuch and at the same time to criticize Democrats for not allowing an up-or-down vote on the Judge.

“What the Democrats have done to block his nomination has never been done—there has never been a successful partisan filibuster of a Supreme Court nomination,” stated Sen. Inhofe. “I support the Majority Leader in changing the rules in the face of this unprecedented action by the minority party.”

Inhofe said there was no reason for the filibuster of such a “highly qualified individual” other than partisanship and catering to the liberal base.

“Changing the rules for Supreme Court nominations had to be done and I know if the situation was reversed the Democrats would do the same in a heartbeat as we saw in 2013 when they changed the rules for all other nominations,” added the Senator.

Sen. Lankford said much the same, saying Judge Gorsuch had been the target of a “smear campaign” in the past few weeks.

“I have to tell that I am profoundly disappointed that the Senate—to get a simple up-or-down vote—had to go through all of this just to be able to do what we’ve always done,” he said.