Protesters Heckle Pruitt in Dallas—-Call Him a “Monster” 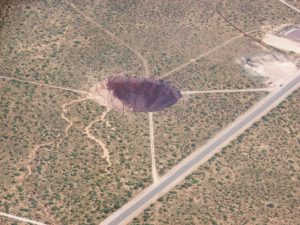 Sink holes are nothing new around mining of energy exploration towns. Consider the sink holes in northeast Oklahoma due to mining. Or the salt mines near Hutchinson, Kansas.

But the big sinkhole that developed eleven years ago near Carlsbad, New Mexico has the state in a fight over who’s footing the bill for the loss of businesses or repairs.

Speculation indicates that the damage could run up to $1 billion, especially if the sinkhole grows and consumes part of the small town known for the Carlsbad caverns.

New Mexico oil regulators put the blame for the sink hole on an oil field service company’s brine well and the New Mexico legislature passed a law in 2010 to fund a solution. But the money was spent elsewhere.

Repairs have not been made even though the state has spent more than $5 million monitoring and studying the cavern. Last month, the New Mexico legislature established an independent board to oversee the cleanup. But they have yet to figure a way to fund the estimated $25 million it’ll take to fill in the hole.

The hole sits next to highway U.S. 285 on the outskirts of Carlsbad.

The cavern was formed by a solution-mining operation that produced brine for use in the oil field. New Mexico has about 30 similar brine wells, which typically operate by injecting water into a salt formation and extracting a solution loaded with salt.

The process naturally creates an underground cavern, but they usually aren’t dangerous. In eastern New Mexico, though, a handful of brine wells were drilled into a relatively shallow layer of salt — 400 to 500 feet below the surface.

Inspectors quickly discovered a problem at the brine well in Carlsbad run by I&W Trucking Inc. The well was drilled in the 1970s and acquired by I&W in 1995. Over the years, it produced between 5 million and 7 million barrels of brine.

Tests showed the brine operation had left an oblong cavern, roughly 350 by 700 feet and 100 feet deep, and it could hardly have been in a worse spot. It’s underneath the “Y” formed by the intersection of two main highways, which lead from Carlsbad to the nearby oil fields, potash mines and Carlsbad Caverns National Park. The irrigation canal that parallels the highway provides water for 25,000 acres of farmland in southern Eddy County.