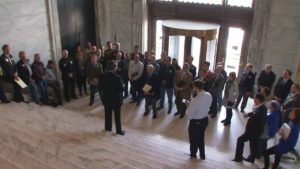 The state legislature has become the battle ground between the “little guys” and the “big guys” in a fight over gross production tax rates in Oklahoma. Members of the newly-formed Oklahoma Energy Producers Alliance rallied Wednesday morning at the capitol then lobbied legislators to increase the gross production tax on major energy companies.

As former Tulsa Mayor Dewey Bartlett Jr. told reporters, the vertical-drilling operators pay a 7% tax rate while those larger companies that carry out horizontal drilling pay only a 2% rate.

“We think that’s unfair,” said Bartlett. About 50 members of the OEPA agreed as they gathered to hear Bartlett speak to them in the capitol.

“It’s killing us,” he said in an interview.

Is it a case of the big boys against the little boys?

“They may spend hundreds of millions and hire more than we do, but we do the same thing,” said Levinson.

However, only a small percentage of wells drilled in the state are vertical. Most are horizontal wells.

Their efforts weren’t lost on the leadership of the Oklahoma Independent Petroleum Association. Executive Tim Wigley told OK Energy Today, ““The oil and gas industry pays 25-percent of all the taxes in the state already. A quarter of every tax dollar comes from us. So, while we appreciate the challenge they have in filling that $900-million hole, I don’t think the thing to do is go to your state’s most important industry and tax it where you might run off investment.”

He didn’t think efforts to increase the tax on large horizontal-drilling companies would be successful.