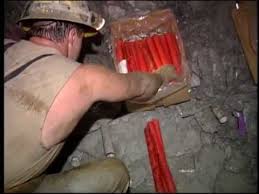 On their way to the State House of Representatives are two bills coming from the House Energy and Natural Resources Committee.

One measure calls for changes in the state’s mining laws that focus on the use of explosives in mines. SB 370, carried in committee by Rep. Rick West of LeFlore County amends the mining laws. The State Mining Department and a number of safety groups asked for the changes, claiming the law was outdated because of technological advancements in the use of explosives.

It will require those who use explosives, blasting agents or detonators to be certified by the Oklahoma Mining Commission. The measure includes dozens of new requirement for the handling of explosives.

The only concern was raised by one representative who wondered whether the new changes might also affect the oil and gas industry. The committee gave SB 370 a “do pass” and sent it to the full House for a vote.

The second measure was SB731 which calls for the elimination or removal of compounding annual interest on certain oil and gas royalty payments. The Oklahoma Independent Petroleum Association asked for the bill and it was carried in the committee by Rep. Kevin Calvey.

The amendment would remove the 12% per annum compounded interest on proceeds of oil or gas production that was not paid prior to the end of the six-month period required by law. It also received a “do pass” from the committee.