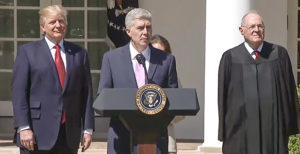 Now the environmentalists are assessing how he might handle cases involving the climate and environmental concerns.

“It’s not going to change a whole lot in the short term,” Joanne Spalding, chief climate counsel for the Sierra Club, said in an interview with Climate Wire.

Attorneys and representatives at environmental advocacy groups, including the Sierra Club, the League of Conservation Voters, Greenpeace and WildEarth Guardians, said Gorsuch’s presence on the court has not altered their legal work or prompted their organizations to shift course in how they conduct public outreach or launch campaigns.

“It does not change the work that we’re doing,” said Desiree Tims, judiciary program director for the League of Conservation Voters. “His confirmation is fresh and was something that was foreseeable.”

Jason Schwartz, a Greenpeace spokesman, said Gorsuch’s arrival doesn’t significantly affect the group because it generally organizes its campaigns at the local and state level and isn’t as litigious as other conservation organizations.

“Gorsuch is not central to our campaigns and strategy,” Schwartz said in an interview, calling the justice a portion of the “pretty unsurprising parade of craziness coming out of the Trump administration.”

Enviros’ eyes are on the lower court