Cushing’s Role in Lack of Pipeline in Permian Basin

Energy Workers in the Panhandle—-Snow is in Tuesday’s Forecast 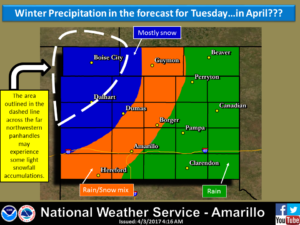 Snow in April in Oklahoma?  It’s what the Oklahoma Mesonet is indicating—at least in the far western reaches of the state’s Panhandle.

State Climatologist Gary McManus asks the question, “SNOW??? Yes, there will be a pretty decent chance of snow across the western Panhandle. We’re not talking a blizzard here, but snow in April is SNOW IN APRIL!”

But at least the snow would continue helping ease the drought in the state on top of the rain of the past several days.

McManus says the drought situation was significantly improved across the northwestern half of the state by the end of March.  While 73 percent of Oklahoma was considered in drought of at least moderate intensity at the end of February, the number had increased to 81 percent by March 21. By because of “hefty rains,” that total had dropped to 36 percent on the last March report.