Energy Workers in the Panhandle—-Snow is in Tuesday’s Forecast

Cushing’s Role in Lack of Pipeline in Permian Basin 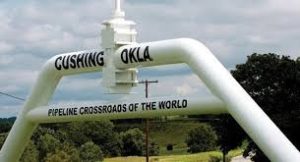 With oil inventories reaching nearly a ten-month high in Cushing, the nation’s largest commercial storage depot, it’s another headache that oil producers in West Texas have to face.  But first, they have to deal with producing too much oil for the pipeline system that exists in the Permian Basin.

The production is close to outgrowing the pipeline capacity. Reports indicate the production in the Permian is expected to grow to 2.65 million barrels a day by the end of the year. But the pipeline system currently in place has a capacity of 2.54 million a day according to a report by Bloomberg.

Work is underway by some companies to expand the pipeline system. Enterprise Products Partners, LP is working on construction of a pipeline that could be thrown into service in the fourth quarter.  But the full capacity of 450,000 barrels a day might not actually be available until early 2018. The new line would run from Midland to Sealy, Texas just west of Houston.

Added to the pipeline shortage, however is the growing U.S. stockpile in Cushing where inventories are pushing 68 million barrels. It’s already affecting oil prices.