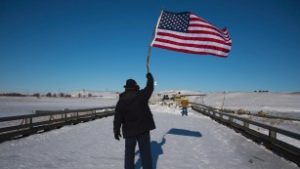 The headlines screaming of the fight against the Dakota Access Pipeline no longer are as many as they once were. But opponents to the North Dakota pipeline say their legal fight is as active as ever in the courts.

And if nothing else came out of the protest by Native Americans and thousands of others from Oklahoma and many other states, it raised awareness of other energy developers.

“They don’t want to attract the attention of the protests more than anything else,” said Brandon Barnes, litigation analyst for Bloomberg Intelligence. He told Energy Wire developers of other projects are especially aware of the impact of social media.

And it is the social media campaigns that might be more important to environmentalists and Native Americans than a courtroom fight.

Following the Dakota Access battle, alleged impacts to American Indian tribes have featured more prominently in opposition efforts targeting other oil and natural gas projects, including the Atlantic Coast pipeline in the Mid-Atlantic and the Sabal Trail pipeline in the Southeast.

In Oklahoma, Native American activists and environmentalists are threatening to attempt to hold a Dakota Access-style fight against an oil pipeline to be built from Cushing to Arkansas.

“Tribes definitely have their antenna up now, and they’re paying attention to these infrastructure projects around them,” said John Dossett, general counsel for the National Congress of American Indians. “It seems to me more likely that tribes are going to hear about these things earlier, pay attention earlier, are going to get engaged more quickly.”

Dossett noted that the Dakota Access drama put federal agencies and developers on notice, too.

“Litigation isn’t in anyone’s best interest, so hopefully there will be more effort to involve the tribes early, work with them and avoid whatever problems the tribes want to avoid,” he said. “If that doesn’t happen, there may be some future litigation, and I think the tribes will be better prepared for it the next time around.”or not it is so substantial that it needs to be dealt with only in the context of the stay,” ClearView Energy Partners analyst Christi Tezak said.