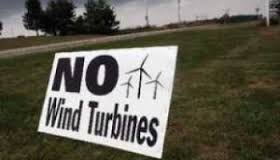 In some areas, there is opposition spreading over the growth of wind energy across the country.

A Dallas Morning News op-ed piece this week, taken from the Los Angeles Times was written by Robert Bryce, a fellow at the Manhattan Institute. He is also the author of “Smaller Faster Lighter Denser Cheaper: How Innovation Keeps Proving the Catastrophists Wrong.”

He contends the push for large-scale renewables, i.e. wind and solar, is crating land-use conflicts in rural regions from Maryland to California and Ontario to Loch Ness.

Bryce sees more objections to the encroachment of wind energy installations and how those objections don’t fit the environmentalists’ narrative. Some of the objections are coming from rural residents who don’t want to live next door to industrial-scale wind farms. The wind farms might be silent but their red-blinking lights at night are a distraction to some residents.

Witness the legal challenges against wind farms near Piedmont.

“If the wind lobby and their myriad allies at the Sierra Club, Natural Resources Defense Council and other environmental groups acknowledge turbines’ negative effects on landscapes and rural quality of life, it would subvert their claims that wind energy is truly green,” wrote Bryce.

He predicts there will be more legal fights as the wind industry attempts to spread across the rural part of the country.

“Wind energy simply requires too much territory. That means we can’t rely on it for major cuts in emissions. Indeed, the more wind energy encroaches on small towns and suburbs, the more resistance it will face. “