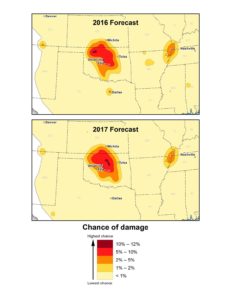 New maps identify potential ground-shaking hazards in 2017 from both human-induced and natural earthquakes in the central United States, according to information released on Wednesday by the U.S. Geological Survey.

It marks the second year that induced seismicity is included on the earthquake hazard map.

Approximately 3.5 million people live and work in areas with “significant potential for damaging shaking from induced seismicity” in 2017. The majority of this population is in Oklahoma and southern Kansas.

Research also reveals that an additional half million people face a “significant chance of damage from natural earthquakes” in 2017. It’s estimated that the total number of people at high risk from both natural and human-induced earthquakes is nearly 4 million.

“The good news is that the overall seismic hazard for this year is lower than in the 2016 forecast, but despite this decrease, there is still a significant likelihood for damaging ground shaking in the CEUS in the year ahead,” said Mark Petersen, chief of the USGS National Seismic Hazard Mapping Project.

The 2017 forecast decreased compared to last year because fewer felt earthquakes occurred in 2016 than in 2015. This may be due to a decrease in wastewater injection resulting from regulatory actions and/or a decrease in oil and gas production due to lower prices.

“The forecast for induced and natural earthquakes in 2017 is hundreds of times higher than before induced seismicity rates rapidly increased around 2008,” said Petersen. “Millions still face a significant chance of experiencing damaging earthquakes, and this could increase or decrease with industry practices, which are difficult to anticipate.”

The new maps indicate an especially high ground-shaking hazard in five areas for 2017. These same areas were identified in the 2016 forecast. Induced seismicity poses the highest hazard in two areas, which are Oklahoma/southern Kansas and the Colorado/New Mexico area known as the Raton Basin. In those areas, there is a significant chance that damaging levels of ground motion will occur in 2017.

Enhanced hazard from induced seismicity was also found in Texas and north Arkansas, but the levels are significantly lower in these regions than that forecasted for 2016. While earthquakes are still a concern, scientists did not observe significant activity in the past year, so the forecasted hazard is lower in 2017.

“The 2016 forecast was quite accurate in assessing hazardous areas, especially in Oklahoma,” said Petersen. “Significant damage was experienced in Oklahoma during the past year as was forecasted in the 2016 model. However, the significantly decreased number of earthquakes in north Texas and Arkansas was not expected, and this was likely due to a decline in injection activity.”

“There is specific concern in parts of the central U.S. since the forecasted hazard levels are higher than what is considered in current building codes, which only incorporate natural earthquakes,” said Petersen.

USGS research considers a magnitude 2.7 earthquake to be the level at which ground shaking can be felt. An earthquake of magnitude 4.0 or greater can cause minor or more significant damage.

The forecasted chance of damaging ground shaking in central Oklahoma is similar to that of natural earthquakes in high-hazard areas of California.

“Most of the damage we forecast will be cracking of plaster or unreinforced masonry. However, stronger ground shaking could also occur in some areas, which could cause more significant damage,” said Petersen.

The new report is valuable for making informed decisions to reduce the nation’s vulnerability and providing safety information to those who may be at risk from strong shaking. The 2016 forecast has been used by engineers to evaluate earthquake safety of buildings, bridges, pipelines and other important structures. The crude oil storage hub at Cushing, Oklahoma is considered vulnerable.