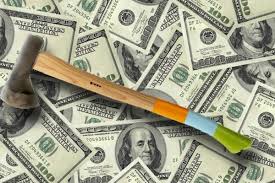 Reports indicate not even Scott Pruitt knew the Environmental Protection Agency would suffer as deep a budget cut when he took over as Administrator following years as the Oklahoma Attorney General.

Under the budget proposed Thursday by the White House, the EPA will lose 31% of its funding. Trump wants to not just trim but slash the EPA budget by $2.6 billion which actually figures to be more than 31%.

He is proposing the elimination of more than 50 programs in the EPA and to bring an end to funding of former President Obama’s Clean Power Plan. Trump also wants to cut renewable energy research funding at the Energy Department.

Some of the regional programs aimed at cleaning up the Great Lakes and the Chesapeake Bay would also be cut under the proposed budget.

If the EPA were to indeed experience the more than 31% slash in funding, it would result in the loss of federal employees. Exactly how many isn’t known. But the agency and others will no doubt become victims of what Trump supporters wanted—cuts in federal spending and bringing an end to the seemingly endless growth of federal employees.