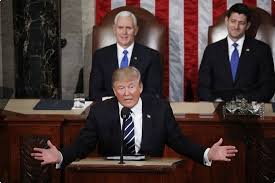 Conservatives saw optimism and hope in President Trump’s first State of the Union Address Tuesday night. Democrats sat on their hands.  Environmentalists remained sour to what the President wants to do with energy-related issues.

Here is how E and E’s Climate Wire described one aspect of the speech:

“The speech reaffirmed Trump’s desire to help coal miners and the idea that his policies are based largely on rolling back environmental regulations, perhaps more than providing assistance to hard-hit communities in Appalachia. He seemed to refer to the Stream Protection Rule, which he rescinded by signing legislation last week, without naming it. The rule would have prevented mountaintop coal mines from further polluting valley streams.

“We have undertaken a historic effort to massively reduce job-crushing regulations, creating a deregulation task force inside of every government agency; imposing a new rule which mandates that for every one new regulation, two old regulations must be eliminated; and stopping a regulation that threatens the future and livelihoods of our great coal miners,” Trump said last night.”

Asked about Trump’s ability to bring back coal jobs, a key promise he made on the campaign trail, Pruitt said: “The last several years, what’s been disappointing in the discussion between the environment and energy is that we as Americans have been told you have to choose. If you choose environment, you’re anti-energy; if you choose energy, you’re anti-environment. And we’ve been better than that as a country for our entire existence. We’ve always been able to find a balance between growing our economy, growing our jobs and being a good steward of the environment. And I think that’s the message the president’s sending. We can do better as a nation.”

Rep. Charlie Dent (R-Pa.) was more specific. His district has seen two coal-fired plants shut down in recent years, and he blames former President Obama and Democrats in Congress.

“I don’t know how easy or quickly we’ll be able to bring back these coal plants,” he said.”