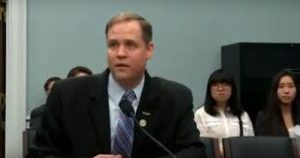 While Congress is abundantly aware that Oklahoma U.S. Rep. Jim Bridenstine would like to become the next NASA administrator, no such decision has been made at the Trump White House. If it has, it has not been announced.

It was last fall when the Republican congressman from the 1st District announced his intentions to seek the job. Since then, it’s been quiet.

“Congressman Bridenstine is honored to have had the opportunity to meet with Vice President Pence and with members of President Trump’s transition team. They discussed space and national security issues. We have no further news regarding a nomination for a position in the new Administration,” stated Sheryl Kaufman, Bridenstine’s Communications Director in an email response to OK Energy Today.

As a former Navy pilot, Rep. Bridenstine has been a strong supporter of the military and the U.S. space program. He also served as the director of the Tulsa Air and Space Museum and sits on House committees and subcommittees involving space exploration.

In recent days, he went before a House Appropriations Committee to ask for more funding of the office of Commercial Space Transportation within the FAA, sometimes called FAA/AST. He asked for $23 million, explaining the U.S. government has become more and more dependent on commercial space operations.

He told committee members even the National Geospatial-Intelligence Agency now has to use a commercial space program to buy data from commercial providers for intelligence. The Defense Department, said the Congressman, uses about 80% commercial satellites for its routine communications.

“In fact, last week American companies building imagery satellites for purposes that the Department of Defense will use, launched 96 American satellites on a foreign rocket. an Indian rocket to be precise,” added Bridenstine.

Listen to his presentation to the committee.