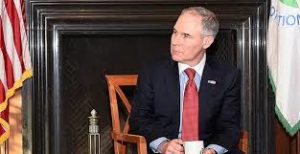 Yet to be determined—whether the Environmental Protection Agency under the control of Scott Pruitt will be slashed by 25 percent as some reports have indicated.

Sounds like Pruitt himself doesn’t know for sure, telling reporters Tuesday night he plans to discuss with the White House ways to save part of his agency’s budget including state grants for water infrastructure and cleaning up Superfund sites.

“I am concerned about the grants that have been targeted, particularly around water infrastructure and those very important state revolving funds. The importance is setting priorities as an agency and then allowing the budget to be formed around that. What’s difficult, having only been there a week, is to have these kinds of recommendations made and then look at our priorities and say ‘You know what, we’ve got to make sure that we look at these programs.”

The former Oklahoma Attorney General said he would ask the President to also consider money for water infrastructure and Superfund cleanup.

“What’s important for us is to educate OMB on what the priorities of the agency are, from water infrastructure to Superfund, providing some of those tangible benefits to our citizens, while at the same time making sure that we reallocate, reprioritize in our agency to do regulatory reform to get back within the bounds of Congress.”

Pruitt also met Tuesday with North Dakota Sen. Heidi Heitkamp, one of only two Democrats who voted to confirm him as EPA administrator. She shares his concern about the impact of EPA cuts.

“The one concern that I have about EPA’s budget is people don’t understand half of it is in grants for water infrastructure. When you’re going to have those big cuts, I think that’s easy to say ‘We’re going to cut it 25 percent.’ What rural America is going to see is cuts in rural water projects, and that’s not something that’s a formula for success.”