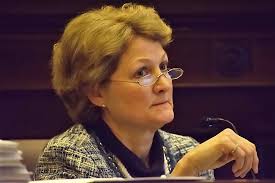 The House Bill calling for a rollback of tax credits for the wind industry is on is way to the State Senate. But it won’t receive unanimous support there, judging by opposition mounted this week in a Senate Committee.

Senator Kay Floyd, a Democrat from Oklahoma City argued the roll back will send a bad message to businesses that Oklahoma won’t keep its word on commercial promises.

“We have projects that are already in the works that may not be able to move forward because they cannot be guaranteed completion,” she argued in committee against HB 2298. “Whether they cease or not is not the problem. It is that they have started with the express understanding from this body last year that they would have until the end of the year.”

The house bill would start the rollback on projects July 1.

“And for the state to come in at this time and unilaterally say we’re changing the rules of the game again is detrimental to the long-term business strategy of this state,” said Floyd.

As News 9’s Aaron Brilbeck reported, the Sierra Club of Oklahoma is also fighting the roll back.

“There is a lot more money to be gained by adjusting the gross production tax than by hitting the wind taxes,” said Johnson Bridgwater, President of the state chapter. He contends a roll back on the 2015 tax breaks for oil and gas production would generate $430 million for the state.