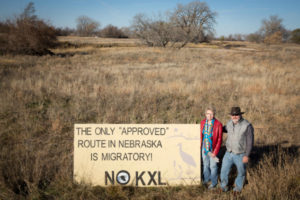 Nebraska state leaders have started accepting comments from those for and against TransCanada’s plans to build the Keystone XL pipeline through the state.

The Nebraska Public Service Commission just started an 8 to 12-month review of the pipeline and plans public hearings beginning this month and continuing through June.

One group’s ginning up opposition. It’s Bold Nebraska, a group formed to fight the pipeline and it’s leader, Linda Anderson in Hastings is growing her opposition campaign. In one recent email, she offered assistance to letter writers who might oppose the pipeline.

She offered the suggestion that the line is “not in the public interest of Nebraska and its citizens.” Anderson said another line of opposition would be to declare that Nebraska does not need to take more agricultural land out of production using eminent domain for private gain to benefit a foreign export pipeline.

“Any pipeline route should avoid the sandy porous soils of the Sandhills, shallow water tables and recharge part of the Ogallala aquifer, as well as endangered species habitats of the Burying Beetle, and migratory paths of the Bald Eagle and the Sandhill and Whooping cranes,” wrote Anderson.

She added the pipeline is trampling Native sovereign rights and threatening land, water and climate.