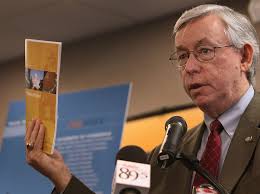 Two years later and some things never change in the Oklahoma legislature, such as attempts to modernize the state’s regulations regarding horizontal oil and gas drilling.

It was April 2015 when OK Energy Today reported on attempts in the legislature. Those efforts are still underway in 2017 as the Oklahoma House Energy and Natural Resources Committee voted in recent days to approve HB 1613, an effort to change the multi-unit concept which was started in 2011.

Horizontal laterals are limited to two miles in shale zones and one mile in non-shale zones but the bill, authored by House Speaker Charles McCall and pushed in committee by Rep. Weldon Watson would make changes.

“This is a work in progress,” emphasized Watson in explaining the measure during a committee hearing. The title was struck so any change could be made before the bill actually is voted on in the full house. It won approval on a 15-3 vote in the House committee.

When Rep. Watson calls it a “work in progress,” he means it. The measure will create the Oklahoma Oil and Gas Resources Development Act of 2017. But a print-out of the bill showing only the name of the act and that it will become effective November 1, 2017. No other details are in the bill.

As they did two years ago, small producers have concerns about the growth of horizontal laterals. What remains is the final product of HB 1613 when it goes before the full house.

Representatives in the hearing indicated there had been meetings with the large independent producers such as Chesapeake Energy where one executive proclaimed there is no longer any vertical drilling taking place.

Listen to Rep. Weldon Watson’s explanation of the bill in Committee.