Keystone XL Permit to be Signed by Monday 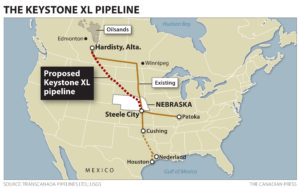 What the Obama administration refused to do, the Trump administration will do—approve the Keystone XL oil pipeline and do it by Monday, according to a report by Politico.

“Undersecretary for political affairs Tom Shannon plans to sign the pipeline’s cross-border permit on or before Monday, the last day for the 60-day timeline that President Donald Trump ordered in January. Secretary of State and former Exxon Mobil Chief Executive Rex Tillerson recused himself from the process,” reported the Washington, D.C. based website.

It was only 16 months ago when President Obama blocked construction of the 1,200-mile pipeline that will carry oil to a site in northern Nebraska. If and when TransCanada moves ahead and completes the line, the oil will eventually be moved to Cushing where it will then be transmitted to the Gulf Coast refineries.

The Oklahoma to Texas Keystone leg was finished two years ago and has been carrying oil from Cushing.