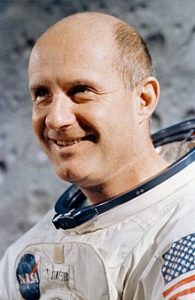 At age 86, retired Air Force Lt. General and Oklahoma native astronaut Tom Stafford is as excited about space travel as he ever was. His excitement was on recent display when he testified before the U.S. House committee on Science, Space and Technology, discussing the past, present and future of NASA.

Stafford suggested that had the space goals of previous administrations been carried out, the U.S. would be further along in its space exploration than it it.

Stafford commanded the Apollo-Soyuz Test Project flight in 1975. He also few aboard two Gemini space flights and in 1969 was the Commander of Apollo 10, the second manned mission to orbit the Moon and the first to fly a Lunar Module there.

Listen to part of his recent testimony.