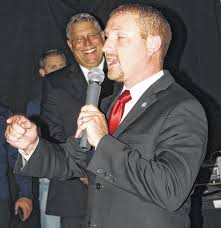 Durant State Rep. Dustin Roberts apparently thinks it is time drivers of electric cars paid their fair share for the wear and tear on Oklahoma roads and highways.

His House Bill 1449 won approval in the State House this week on a vote of 51-44. It is a bill that would enforce up to a possible $100 fee on electric cars.

His bill would make the payment required before any electric vehicle was licensed and registered.

“These vehicles do help our economy. They buy electricity. We produce electricity in this state to a large extent they are participating in that area,” said Rep. Chuck Hoskins of Vinita.  “Now we’re gonna place an additional burden on them to pay these fees?”

“Is the intent of this bill to punish people who drive electric cars,” he asked. “Are we so inspired to impose a new fee on people and raising revenue has nothing to do with this bill?”

The measure is in the hands of the Senate.