Summary of Permits and Completion Reports for the Week of February 6-10, 2017 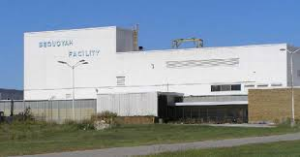 Plans by a firm to permanently store uranium contaminated sludge at the former Sequoyah Fuels facility near Gore in eastern Oklahoma are on temporary hold after the State and the Cherokee Nation went to federal court to win a temporary restraining order.

The State and the Tribe fear possible contamination of the nearby Arkansas and Illinois Rivers. The court order was granted last week.

The Sequoyah Fuels plant, which converted yellow-cake uranium into fuel for nuclear left large amounts of uranium-contaminated sludge when it was closed in 1993. The plant was closed on orders of the U.S. Nuclear regulatory Commission following a toxic gas release that resulted in 34 people getting medical treatment in 1992. One worker was killed and three others injured in a January 1986 incident.

Originally opened in 1970 by Kerr McGee, the plan collected nearly 11,000 tons of uranium-contaminated sludge. In the fall of 2004, the state, the Cherokee Nation and Sequoyah Fuels entered into an agreement where the company agreed to spend $3.5 million to dispose of the waste off-site.

But the company indicated earlier this month that it could not dispose of all of the waste and planned to store it permanently at the site of the plant. That’s when the Cherokee Nation and the state went into action.

The Tribe and the state wanted an expert to review the off-site disposal options but the company stated its intention to begin immediately putting the waste in an on-site cell.

“The Cherokee Nation is a staunch defender and protector of our natural resources,” said Cherokee Nation Principal Chief John Baker. “We will not stand idly by and allow the Arkansas River, one of our most precious resources and the Cherokee community of Gore to be polluted.”

“The safety of the environment, our citizens and all people in and around Gore is our highest priority,” said Sara Hill, secretary of natural resources for the Cherokee Nation.