Grant County Commissioner to Testify Before US Senate Environment Committee 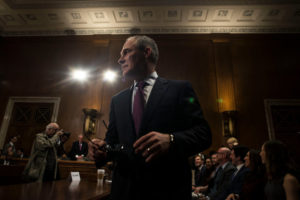 While Attorney General Scott Pruitt waits on the U.S. Senate to hold a confirmation vote on him taking over the EPA, he remains the target of attacks from environmentalists and Democrats.

The latest comes from three-term San Diego-based Rep. Scott Peters who is a new member of the House Energy and Commerce Committee. He also was interviewed by Politico’s Morning Energy Report and used it as an occasion to go after Pruitt.

“These are people that are not just conservative, they’re really radical,” he said of Pruitt and former EPA transition chief Myron Ebell. “This whole notion that we can make problems go away by pretending that they don’t exist seems to be the response to the climate threats that we see.”

Peters practiced environmental law for 15 years before getting elected to Congress.

“I knew how those laws worked and didn’t work. And a lot of my clients were frustrated by the inability to get through the process without a lot of delay.”

Meanwhile, Pruitt was the target of a New York Times piece which claimed Pruitt is drawing up plans to move forward on President Trump’s pledge to get rid of the EPA.

Reporter Coral Davenport described Pruitt as going after the EPA with a scalpel, not a meat cleaver.

“The president has tapped a surgeon, not a butcher,” to fulfill Trump’s pledge to eliminate the EPA.

“His changes may not have the dramatic flair favored by Mr. Trump, but they could weaken the agency’s authority even long after Mr. Trump has left office,” wrote Davenport.

Davenport was one of the New York Times reporters who took their own hit for the piece they did on former Texas Gov. Rick Perry, suggesting he was in over his head as the Energy Secretary. Others noted that Davenport and David Sanger had no evidence to back up their claims that Perry thought he was about to be a global ambassador for the oi land gas industry. Even Roll Call reported Perry knew what he was about to get into as Energy Secretary.