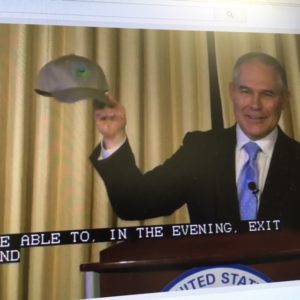 In his first address to the thousands of people who work for the U.S. Environmental Protection Agency, new Administrator Scott Pruitt delivered a message of what he expects of them.

Smiling and holding an EPA baseball cap given to him during his introduction to workers gathered at EPA headquarters, Pruitt again stressed the ‘rule of law’, a phrase he mentioned numerous times during his controversial confirmation hearing before the U.S. Senate Environment and Public Works Committee.

“I believe that we as a nation can be both pro-energy and jobs, and pro-environment,” said Pruitt. “We don’t have to choose between the two.”

But he said “leaders listen” and he will be listening to his employees in an effort to better understand what they do.

“I think our nation has done better than any nation in the world at making sure that we do the job of protecting our natural resources, and protecting our environment, while also respecting economic growth,” added Pruitt in remarks to about 70 EPA staffers. The speech was also carried over the Internet so employees elsewhere around the country could watch and listen.

Pruitt said he will emphasize “federalism” and wants the EPA to be more of a partner with states in implementing environmental laws.

Listen to some of his remarks delivered Tuesday morning.