New Pipeline Gets Approval from FERC 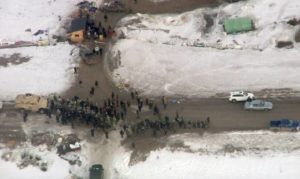 The developer of the Dakota Access Pipeline will have to go before the North Dakota Public Service Commission to face claims it did not notify the commission when it discovered a Native American cultural site during work on the controversial pipeline.

Texas-based Energy Transfer Partners maintains it was an unintentional violation of state rules when it diverted construction last October around artifacts and failed to immediately notify the Commission.

The three-member commission recently denied ETP’s request to dismiss the complaint and said if there was a willful violation, it should be determined at a hearing. Commission staffers say the company should be fined $15,000 for the violation, even if the artifacts were not disturbed.

Work remains stalled on the $3.8 billion pipeline that stretches 1,200 across four states.

Meanwhile more arrests of protesters have been made including American Indian activist Chase Iron Eyes. He was among 73 arrested days ago when they set up teepees on land that authorities have ruled is owned by the pipeline developer. Iron Eyes was charged with inciting a riot which is a felony that carries a maximum sentence of five years in prison.

The Army Corps of Engineers notified others they have until Feb. 22 to clear out of the encampment near Lake Oahe because of a threat of flooding.