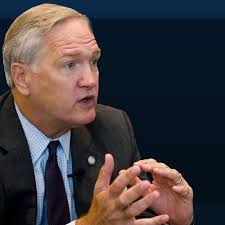 One vote that Oklahoma Attorney General Scott Pruitt will likely get during his confirmation vote in the U.S. will come from Alabama’s new U.S. Senator, Luther Strange.

And there’s nothing strange about it either. That’s because Sen. Strange, the man appointed to take over when Sen. Jeff Sessions became U.S. Attorney General was Alabama’s former Attorney General.

As Attorney General, Strange signed a letter with 24 other attorneys general in support of Pruitt taking over as Administrator of the EPA. Strange also signed a letter last year detailing a four-point plan to withdraw the Clean Power Plan.

Oh yes, he was one of the 27 attorneys general who filed suit against the EPA in 2015 over the Clean Power Plan.

Here’s what he said at the time.

“Today, Alabama joins nearly half of all U.S. states in challenging the Environmental Protection Agency’s plan to force millions of Americans to pay higher electric bills in order to satisfy the political agenda of the Obama Administration’s war on coal.”

Strange continued in comments sounding so much like an echo of Pruitt’s criticism of the EPA’s plan.
“The EPA under the guise of a so-called Clean Power strategy is actually attempting a radical transformation in the way electricity is generated in this country, forcing many to suffer higher heating and cooling costs and thousands more to lose their jobs all because it pleases the Obama Administration’s political supporters.  Arbitrary downsizing of cost-effective coal-generated electricity in many states, including Alabama, could cost over $25 billion nationally per year with consumers left to foot the bill.”

The comments leave little doubt about how new Sen. Strange will vote when it comes time to confirm Pruitt.