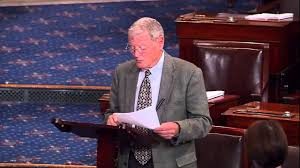 One of the so-called “midnight regulations” that was created in the last weeks of the Obama administration is being fought by Oklahoma U.S. Sen. Jim Inhofe.

It is the EPA’s proposed Risk Management Rule which is designed to improve safety at facilities where hazardous chemicals are used, stored and distributed.

At first read, it would appear to be a reasonable rule, but Sen. Inhofe charged in a recent floor speech in the Senate that it will make communities at a higher risk to terrorism.

“There are several concerns with this rule, but the biggest one is the national security implications due to the rule’s public disclosure requirements,” said Inhofe. “Under the new RMP rules, facilities are required to share information on the types of chemicals stored there and security vulnerabilities with emergency responders and, upon request, to the general public.”

Inhofe argued the rule does not provide for the protection of the information from further disclosure once it is provided.

“It is well known that terrorists have considered attacks on chemical facilitiews as a way to kill citizens and cause mass destruction to our communities. Requiring the disclosure of this information to anyone who asks is reckless and impossible to understand. In fact, Congress has passed several bills to protect just this kind of information. I was even the author of one of these bills.”