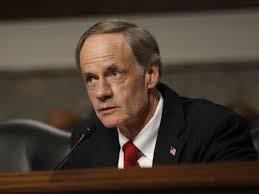 While Scott Pruitt’s name is on its way to the U.S. Senate, Democrats who boycotted a Thursday vote on the Senate Environment and Public Works Committee defend their actions.

Led by ranking committee member, Sen. Tom Carper (D-Del.) they decried committee chairman Sen. John Barrasso’s decision to suspend the committee rules “and rush through the controversial nomination.” They still want what they call “essential information about his record.”

In a statement from Sen. Carper, the Democrats said they had repeatedly requested for relevant documents and substantive answers on fundamental policy matters on which “he had refused to be straightforward.”

“This Groundhog Day, EPW Democrats are living the Bill Murray movie,” said Carper. “As far as I’m aware, we still have not received the relevant documents and the substantive answers we’ve requested from Mr. Pruitt. So it seems that the only thing that has changed is that it’s Thursday instead of Wednesday.”

He said Democrats have to stand their ground in “our pursuit of the truth.”

“Enough stonewalling. Scott Pruitt needs to come clean with this Committee and the American people about conflicts with the fossil fuel industry that he would regulate if confirmed. He’s dodged our questions, ignored our letters and told us go to the back of the line and make open records requests to get the information we are entitled to.”

Whitehouse asked the question, “What is Scott Pruitt hiding?”

Other Democrats offered an explanation of their action.

“I am concerned that we do not know which Scott Pruitt wants to become the EPA Administrator–the one who testified before the EPW Committee committing to support multi-state solutions to improve the health of the Chesapeake Bay or the one reversed court in his responses to written questions, falling back into his position as a lawyer who sued the EPA over and over again,” said Senator Ben Cardin of Maryland.