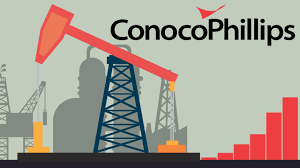 Houston-based ConocoPhillips reported a fourth-quarter 2016 net loss of $35 million.  And that’s a big improvement over the $3.5 billion reported lost in the fourth quarter of 2015.

The company stated that excluding special items, its fourth-quarter 2016 adjusted earnings were a net loss of $318 million compared to the $1.1 billion lost a year earlier.

While things got better throughout 2016, the full year earnings were a net loss of $3.6 billion, down from the $4.4 billion reported lost in 2015. Those losses contributed to layoffs at the company’s Bartlesville operations. Workers there faced at least two rounds of job cuts last year. ConocoPhillips had about 1,400 workers in Bartlesville at the time of last year’s layoffs.

“Our recent performance highlights the significant changes we’ve made as a company to respond to a world of lower and more volatile commodity prices,” said Ryan Lance, chairman and chief executive officer. He said disciplined changes will improve the performance to shareholders.

The company reported its operated rig count in the Lower 48 increased to eight at year-end with rigs added in the Eagle Ford and Bakken. Record production levels were reported in the oil sands assets in Canada.