City of Lawton Pushes Ahead with Energy Saving Plan 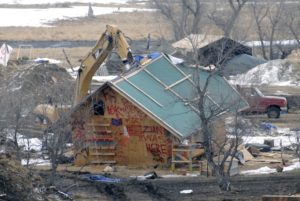 The environmentalists who protested and demonstrated against the Dakota Access Pipeline in North Dakota left enough trash behind that they created their own environmental problem. The U.S. Army Corps of Engineers had to hired a Florida-based company to remove the trash and other debris left behind when the Standing Rock Sioux Tribe finally abandoned the protest site over the weekend.

The cleanup is underway at the main Oceti Sakowin camp on the north side of the Cannonball River and the smaller Rosebud camp on the south side. Both were located on federal land.

Nearly 240 dumpsters, filled with old food stores, structures, tents and abandoned personal belongings were hauled out of the main camp. The Army estimates it will take another 240 dumpsters to finish the job.

While the protesters were claiming the Dakota Access Pipeline would harm the environment, the mess they left behind forced the Army to have a special environmental crew on hand to deal with any potentially hazardous or toxic material.

Some of the protesters moved to other camps on the nearby reservation and they are being moved by the Bureau of Indian Affairs and tribal officials. Concrete barriers erected to block traffic near the camp were being moved. But Highway 1806 was still closed north and south of the camp.