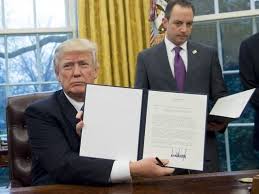 For some oil and gas operators, President Trump’s action on Tuesday was what they wanted—-a reversal of President Obama’s decision against the Keystone XL oil pipeline and later a move to stop construction of the Dakota Access pipeline in North Dakota.

President Trump had campaigned on the promise of reversing Obama’s Keystone decision and with the stroke of a pen, signed executive orders paving the way for it and the Dakota Access line.

As he signed the orders with reporters watching, President Trump explained he would support any projects that make use of American steel.

The order on the Dakota Access will be felt immediately, allowing Energy Transfer Partners based in Dallas to complete the the final 1,100-foot piece of the route that runs under Lake Oahe. It is there that thousands of protesters, including members of the Standing Rock Sioux tribe have staged demonstrators and camp-ins.

The tribe contends the 1,172-mile pipeline route would endanger water supplies and disturb sacred burial and archaeological sites. The pipeline will carry oil from North Dakota and through South Dakota and Iowa to a refinery in Illinois.

As for the Keystone XL pipeline, President Obama moved against it, claiming it would contribute to climate change by carrying tar sands crude.

No immediate reaction came from TransCanada, the Calgary-based project owner. But the company had indicated it might be interested in reviving the project.

But some energy company leaders called it good news.