NY Times Under Fire over Perry Story—-Accused of Fake News 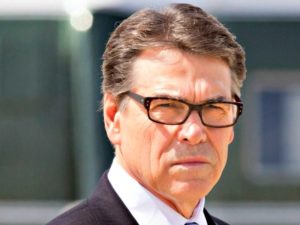 A New York Times story this week that former Texas Governor Rick Perry knew little about the Energy Department before he was nominated to become the U.S. Energy Secretary resulted in other publications calling it “fake” news.

Among those making the claim of fake news is the Daily Caller. The journalism organization took on  New York Times reporters Coral Davenport and David Sanger, claiming the two had only one source for the basis if the story. What Davenport and Sanger wrote made it appear Perry is not bright and had very little clue as to what the Energy Department does.

Reason.com also went after the Times for the story. Nick Gillespie noted that the main source of the Times story later said the Old Gray Lady “mischaracterized his comments.”

Then there is the coverage by the National Review. Its headline read: Anatomy of a Hit Job:  The NYT’s Disgraceful Attack on Rick Perry.

“The article that follows, written by reporters David Sanger and Coral Davenport, provides precisely no evidence to support the claim,” stated the Review.

The Review said the Times penned a hit job.

“The Times assumed that Rick Perry is a dumb Texan hick, then wrote a piece to bolster that impression—-and journalists eager to see their impressions validated leaped to share it, blithely ignoring the glaring lack of evidence for the central claim.”

How did the Review finish its critique of the Times piece?

“As noted, on Thursday morning the Perry piece led the Times’ website’s politics section. Next to it was a piece entitled, “From Headline to Photograph, a Fake News Masterpiece.” Oh, the irony.”