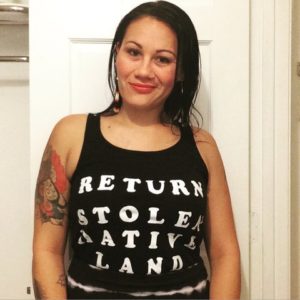 Could Oklahoma become the site of a Dakota Access style oil pipeline protest?  it’s what some Native American activists and environmentalists suggested this week as they voiced opposition to the $900 million Diamond pipeline. The line will carry oil from Cushing to Memphis, Tennessee.

“We are forming a coalition. We are organized and we will not tolerate the destruction of indigenous land anymore,” declared spokeswoman Ashley McCray, a member of the Absentee Shawnee Tribe. “I’m here standing before you today to say ‘enough is enough—indigenous people cannot be treated this week any more. Black communities cannot be treated this way any more.’ This is a clear cut case of environmental racism.”

She and members of the Sierra Club complained that the pipeline could threaten graves of Native Americans who died along the Trail of Tears.

“We need those farmers and ranchers and men and women that rely on agriculture to stand with us, united, become allies, protect the water, protect the land and protect our way of life.”

McCray claimed the pipeline was environmentally racist because of where it was going to be built.

The Oklahoman reported that a spokesman for Plains All American Pipeline, which is building the line in a joint venture with Valero had reached out to nearly two dozen tribes to get their input on construction. The spokesman indicated the tribes had chances to review and comment about the route even before permits were issued by the U.S. Army Corps of Engineers.