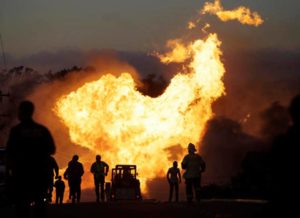 Six years after a pipeline explosion killed 8 people in the San Francisco suburb of San Bruno, Pacific Gas and Electric Company is ready to pay a maximum $3 million fine. This, after a jury convicted the firm of deliberately violating pipeline safety regulations.

But the utility is also asking a federal judge not to restructure the bonus program for employees or require an advertising campaign publicizing the conviction. U.S. District Court judge Thelton Henderson was set to sentence the company on Monday but delayed the matter, saying he wanted more time to consider comments from the government and PG and E.

Prosecutors had asked the judge to impose the bonus and advertising requirements, calling the $3 million fine “a drop in the bucket” for PG and E.

The jury convicted the company of five of 11 counts of pipeline safety violations and prosecutors claimed the firm deliberately misclassified pipelines in order to save money.