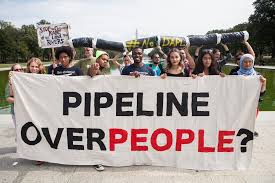 Environmentalists and others who opposed the Keystone XL pipeline knew it was likely coming when Donald Trump was elected President.

On Tuesday, he carried through with his pledge to reverse the executive orders of President Obama that stopped construction of the Keystone as well as the Dakota Access Pipeline in North Dakota.

“The world’s climate scientists and its Nobel laureates explained over and over why it was unwise and immoral,” said Bill McKibben, the founder of the group 350.org. “In one of his first actions as president, Donald Trump ignores all that in his eagerness to serve the oil industry. It’s a dark day for a reason but we will continue to fight.

The group he founded had fought the Keystone as well as the Dakota Access pipelines.

Greenpeace Executive Director Annie Leonard threw in her disappointment too, expressed in a statement.

“Indigenous communities, ranchers, farmers, and climate activists,” she vowed, would not give up.

“We all saw the incredible strength and courage of the water protectors at Standing rock, and the people around the world who stood with them in solidarity,” said Leonard. “We’ll stand with them again if Trump tries to bring the Dakota Access Pipeline, or any other fossil fuel infrastructure project, back to life.”

She vowed to resist “with all of our power and we will continue to build the future the world wants to see.”