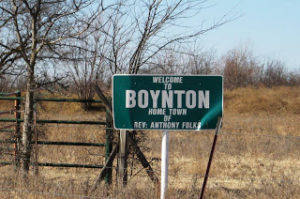 The Muskogee County Sheriff’s office is working with city leaders in the eastern town of Boynton to determine if someone’s possible illegal actions might have led to the town’s water tower being emptied this week.

Travis Wilson, the town’s water operator told the Muskogee Phoenix he suspected “foul play” caused the water loss. At one point, the town was losing nearly 100 gallons a minute which totaled 140,000 gallons a day before the main valve was closed.

“The only thing I can deduce from that is somebody put in an illegal tap,or they have some way to get water they are not supposed to be getting. Whoever did this had to know we were out of water—-I have lost a lot of sleep over this issue and I’m not a happy camper right now.”

The Oklahoma Department of Environmental Quality provided assistance to Boynton leaders. So did the Oklahoma Rural Water Association and the town of Haskell.