Chesapeake Close to Settling DFW Airport Board Lawsuit for $8.2 Million

Advice from T. Boone to Trump: Don’t Screw Up and Don’t Settle 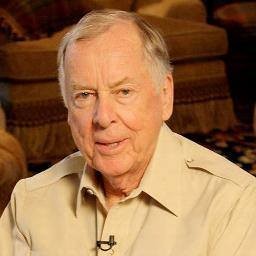 Another billionaire oilman with Oklahoma ties has two policy recommendations for the Trump administration concerning the country’s energy plan.

The founder and chairman of BP Capital Management expounded on his first point by clarifying the direct role of who makes energy decisions since some decisions are handled by the president, Department of Energy, State Department, Environmental Protection Agency and Department of Commerce.

He further believes that Trump should work with industry rather than against it.

Finally, Pickens insists that America must meet our nation’s own energy needs before we worry about other countries.

Pickens is a strong proponent of working with our allies. In fact, he supports approving the Keystone XL pipeline construction to transport Canadian oil to refineries in the U.S.

One of his most prolific points is that we must build the electrical grid of the future.

Finally, Pickens vows that we must continue to research and develop new energy sources.

“[Perry] has years of experience working with industry, and he understands both the immense needs and incredible opportunities our nation has with regard to energy,” said Pickens on Rick Perry.