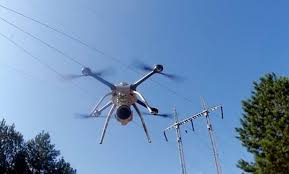 The Topeka Capital Journal reports the utility deployed drones commercially and is using them to inspect boilers and traveling challenging territory to get a bird’s eye view of transmission lines.

The drones were the result of a partnership Westar Energy began in 2013 with Kansas State University’s Polytechnic Campus to create an unmanned aircraft systems program. Just last year, KSU opened one of the nation’s largest enclosed unmanned flight facilities at the campus in Salina.

“There are still some airspace restrictions in some areas, such as Wichita and even here in downtown Topeka,” continued Klenklen. “Within line of sight, that’s still a pretty big restriction on us. Still, we’re able to see several miles down the line with one of these.”

Westar uses quadcopters or multi-copters which are four-bladed machines that can fly anywhere from 20 minutes to more than 45 minutes.

“The potential is unlimited. Not only in our industry but others as well,” said Klenklen.