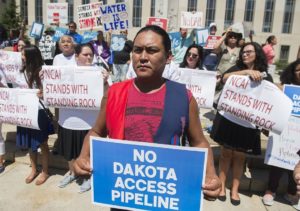 The Global Day of Action is set for 9 a.m. at Kerr Park located at the corner of Robert S. Kerr Avenue and North Broadway Avenue. Organizers will accept supply donations which will be delivered to Standing Rock.

Oklahoma Supports Standing Rock is the tribal coalition behind the protest. The group continues to call for an end to the violence and excessive force at the site where the Dakota Access Pipeline is under construction.

One of the protest speakers is Alecia Onzahwah, a member of the Absentee Shawnee Nation, who recently returned from the Standing Rock encampment.

“Any state’s failure to grant equal protection of civil rights such as freedom of speech and the right to peacefully assemble should be alarming to us all,” said Onzahwah. “We all share the same world and the same water.”

Oklahoma City Ward 2 council member Ed Shadid recently returned from his visit to Standing Rock. Shadid encouraged Oklahomans “to witness a historical event and to learn how to lead a disciplined nonviolent resistance campaign which is so desperately needed here.”

At the December 1 Kerr Park demonstration, protesters are calling on members of Oklahoma City’s financial district to divest from the Dakota Access Pipeline.