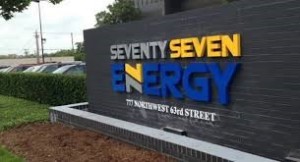 Oklahoma City-based Seventy Seven Energy Inc. will be acquired by Houston-based Patterson-UTI Energy, Inc. in a merger worth $1.76 billion, according to a joint press release issued by both companies on Monday.

“The merger combines two strategically aligned companies into one company that will be financially well-positioned and a leader in U.S. land,” said Jerry Winchester, Seventy Seven’s CEO. “Given the changes our company and industry have been through the past two years, this merger is the right decision for our shareholders, employees and the oil-field services industry as a whole. This transaction will establish a company with tremendous scale, a diversified customer base and premier assets located in the most active basins in the U.S. In closing, Patterson-UTI shares our commitment to service quality and safety, and we are excited to align ourselves with them in the coming months.”

Both energy companies are leaders in building and operating high-spec rigs. The merger will further solidify Patterson-UTI as a leader in the domestic land drilling market with 201 high-spec rigs and more than 1.5 million hydraulic fracturing horsepower.

The merger is subject to the approval of regulators and shareholders of both companies. The transaction is expected to close late in the first quarter of 2017.

“We are very excited to be joining forces with Seventy Seven Energy,” said Andy Hendricks, Patterson-UTI’s CEO. “Their contributions will allow us to further capitalize on the shifting industry fundamentals in the U.S. oil and gas market, where customers are increasingly-focused on efficiency and high-quality execution.”

In 2014, Seventy Seven Energy was spun off from Oklahoma City-based Chesapeake Energy Corporation. Seventy Seven filed a bankruptcy petition in Delaware during May but quickly emerged from reorganization proceedings in August after successfully completing its prepackaged restructuring and recapitalization efforts.